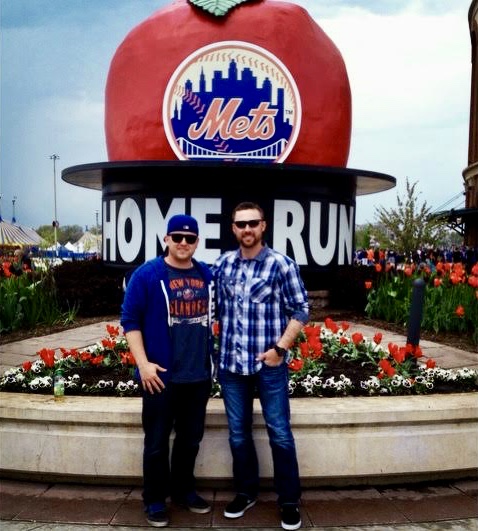 Lets get right down to it. I was born on Long Island in 1986. The New York Mets owned the Big Apple at that time. I mean, how could I not fall in love with the boys from Queens, right?  As a young kid, I watched highlights of that World Series Championship team over and over. It got to a point that I was able to recite most of the announcers in those video clips. Man, what a team. The Kid, Doc, Straw, Mex, Nails and HoJo.

I became a Mets fan primarily because I was born into it. My grandparents were fans, as were my parents. My Dad and grandfather went to a 1969 World Series game between the Baltimore Orioles and Mets, where they and thousands of other fans ran on the field after the game. The history of Mets players started to grow on me at a young age, especially my uniform number, #14. All I knew was the #14. My Dad wore it. I wore it. My younger brother wore it. The story goes, my Dad’s favorite player was Ron Swaboda, who wore #14 in the 60’s. In 1968, when former Brooklyn Dodgers legendary first baseman Gil Hodges, who wore #14 in his playing days, came to manage the lovable losers in Queens, Swaboda switched his jersey number to #4 and gave Gil #14. Hodges’ #14 is one of four Mets numbers retired by the organization, along with Manager Casey Stengel (#37), pitcher Tom Seaver (#41), and catcher Mike Piazza (#31).

Shea Stadium; the big ballpark in Queens. My home away from home. For a kid on Long Island there was nothing like walking up to Shea and hearing the song “Meet the Mets” blare throughout the old speaker system outside the entrances. Or walking up those long ramps to your seats before the games, and following a big win, walking down the ramps with a raucous pumped up crowd. I enjoyed listening to the 660 the FAN, WFAN to and from the games in the car. How could you not have spent many a game in the red Upper Level seats? We all did. It was cool when a “fake uncle” would let me know, “Hey after the third inning go down the first base line in the Field Level and find Tony the usher. He will hook you up!” And sure as hell, he did. Tons of games were watched down the first base line, just passed the infield. My fondest memories of Shea, however, is walking through the tunnel, whatever level you were at, and laying eyes on the greenest and most manicured grass I ever saw. It made my eyes light up. This is the Big Leagues. This is Shea Stadium.

I’ve been lucky enough to have been at some historic moments in the history of Shea. During the NLCS of 1999, my grandparents, dad, and myself sat in the Upper Deck, down the first base line, where you could see the Mets bullpen and beyond the outfield fence wall. That was the walk-off “Grand Slam Single” by Robin Ventura; the ball was a no-doubter soaring through the rain beyond the right center field fence. This walk-off was most notable because of catcher Todd Pratt running to the second base line and hoisting Ventura up in his arms before he could touch second base; hence the Grand Slam Single. That night I thought the Upper Deck was going to collapse. The Stadium was rocking so much. I had visions of looking at the third base line loge and seeing it bounce up and down. “Rock Like Shea” began to be used in the normal language of Mets fans.
Other than Piazza, players that I drifted to growing up were, Todd Hundley (a catcher before Piazza), Jay Payton, and David Wright. I always watched videos of Gary Carter in the ’80s, and then fast forward to 2009; he was my manager with the Long Island Ducks; surreal to listen and learn from a Hall of Fame catcher and World Series Champion. Also, spending four seasons with the Ducks from ’09-’12, Buddy Harrelson was and still is a coach and owner. For you Mets fans, a little trivia, Buddy is the only man in Mets history to be in uniform for both World Series Championships. He was the short stop of the 1969 Miracle Mets and the third base coach for the 1986 squad.

9/21/01. The first sporting event in New York since the terrorist attacks of 9/11/01. I was not at this game, although, I wish I was. To see New Yorkers unite together is always a thing of beauty. The Amazin’s were down 2-1 in the 8th of a flat, erie game to the division rival Braves, when Piazza walked up to face Queens native, Steve Karsay. Piazza drove a pitch to deep dead center, which bounced off the TV camera station, and Shea erupted with immense emotion of happiness; something New Yorker’s had not experienced for ten days prior. The Mets won the game and that historic home run in America’s Pastime, helped start the healing process for New Yorkers.

In July of 2008, Billy Joel played two concerts at Shea, donned, “The Last Play at Shea”. This was the final performances of the big blue ballpark. My family and I, along with a few friends went to the second of the two shows, the real last play. Billy had notable musicians help him close the Stadium down including Garth Brooks, Roger Daltrey, Steven Tyler, Tony Bennett, and Sir Paul McCartney. An unbelievable experience with a few combined passions of mine; family, Billy Joel, Mets baseball, and Shea Stadium.

Once the Mets were eliminated from playoff contention, on the final day of the regular season in 2008, and the crains were awaiting to start demolition of Shea for the new shiny Citi Field in the background, I felt a part of me was gone; part of my childhood, and part of my college days, as I played college ball at Queens College down the road from Shea. We went to so many games those years as well. A family friend was head of security at Shea and I randomly texted him that I was sitting in my car right in front of the Shea Stadium sign entrance. He told me to meet him behind the plate and took me in. The day before was their final out, and they were already tearing it down, but I got a few keepsakes; a few great photos of myself in the dugout, on the pitchers mound, and behind home plate. 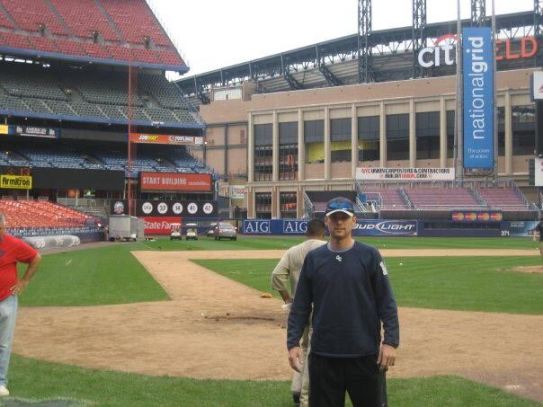 I never was able to attend a Mets World Series game. In 2000, watched the fall classic from home. But in 2015, in part of hustling with Digmi, we were able to attend Game 3 at Citi Field; the game when David Wright hit a 3 run homer and 4 had RBIs. That game at Citi felt like the old days at Shea. You see, when Citi Field first opened, you would have had no idea that it was the home of the Mets. It had no murals of any past history of the organization and rarely any blue and orange. It looked like it was a neutral ballpark, not too intimate for Mets fans. But over the years, the Mets took notice to the fan base and their desire to bring tradition back. The outfield fence is now blue with orange trim, there are Mets greats plastered all over the walls of the concourse, the original Home Run Apple, is not hidden back behind the bullpens like the first year, and now is out in from of the Citi Field entrance; a great spot for fans to meet prior to the games and a perfect photo op. 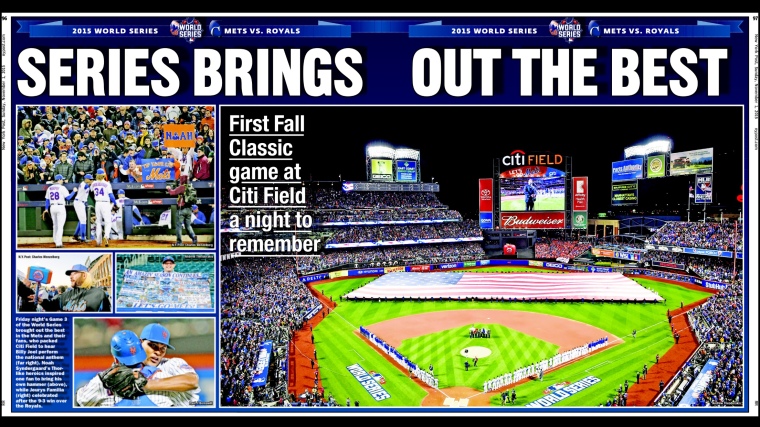 I’ve been hustling with Digmi since 2009 and to watch the ever growing list of Big Leaguers wear the line is amazin’ to see. From Mets believers early on such as Jose Reyes, Dillon Gee, Eric Young, Jr., and Rene Rivera to Noah Syndergaard, Jacob DeGrom, Travis D’arnau, Curtis Grandson, and Yoenis Cespedes to name a few. The steam Digmi has received the past few years after the public seeing these Big Leaguers wearing the brand is still rolling and extremely fulfilling. 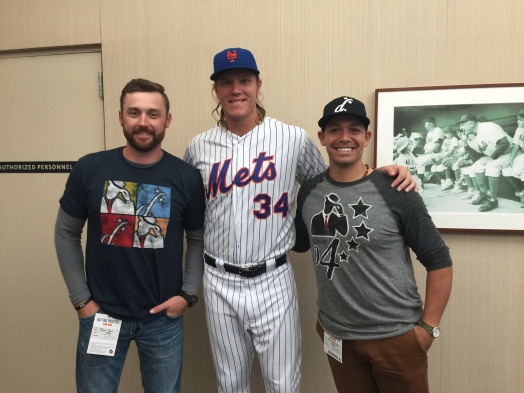 The 7 Line has helped invigorate Citi Field over the years. Not only has it been the pulse of the Mets fan base, but they have done an amazing job setting up 7Line Army outings at visiting ballparks across the Country. The Digmi team has taken a few of these outings in, a couple at Citi Field, and one on the road in Washington, D.C. The energy that this group of die-hards bring is off the charts. You can never go wrong with attending a Mets game at Citi Field in which the 7 Line is having an outing, posted up in centerfield, just to the right of the Home Run Apple.

Citi Field has its own identity now and Shea is still there in spirit; The Shea Bridge and the original Home Run Apple, the city skyline from Shea’s scoreboard, sure do make it feel like home. Year after year, the Flushing Faithful is coming out to Meet the Mets, along with the more winning baseball on the horizon, the times and teams may change, but it is becoming the Same Citi, Different Shea.